Rumble in the jungle

Mercenaries are cool. You only have to look at the number of airsofters rocking PMC gear to realise that.

But for me, the coolest of all mercs were the ones attracted to the war in the former Belgian colony of Congo back in the early sixties. Maybe it’s because I grew up on the ‘mercsploitation’ movies of the sixties and seventies, the most notorious being the ultra-violent (for its time) ‘Dark of the Sun’.

Mercsploitation at its high camp finest.

This jolly romp was inspired by several episodes from the Congo war and was the first film in the history of cinema to feature a homoerotic chainsaw duel. I urge you to seek it out.

Anyway, my interest was re-awakened recently by the release of the Netflix Original movie, The Siege of Jadotville. This very watchable (for airsofters) film tells the true story of a company of Irish UN peacekeepers besieged by secessionist forces in the province of Katanga in September 1961.

Thankfully there’s a minimum of political philosophising and girly love stuff. Mostly the screen action consists of blokes armed with FN FALS and Bren guns having at each other during the course of a five-day on-and-off gun-battle.

The gallant Irish defenders, short on water, ammo and whiskey face wave after wave of local Katangese Gendarmes reinforced by European mercs. The result is a dignified and moving surrender by the Irish UN forces.

Much to the disgust of my bank manager, the movie has inspired me to indulge in a frenzied three–month geardo collecting spree which is the main subject of this article. Though I first feel obliged to put on my worn tweed jacket and do the history teacher thing.

Belgium managed its retreat from Empire with all the sensitivity of a rabid dog that has just taken an enormous dump on your pristine front lawn. Congo was perhaps the most notorious example of this policy. One day they just upped and left, leaving behind a few decent patisseries, a small bunch of die-hard colonists, and a whole load of tribal ethnic strife.

Uniforms seem to have been optional for Congo mercenaries.

No sooner had they withdrawn than they realised they’d left something rather important behind. Namely, a rich seam of uranium ore under a province of Congo called Katanga. So in league with the CIA (who were quite keen on safeguarding the west’s supplies of potentially fissile material) they began a covert re-occupation of Katanga.

Mad by name. Mad by nature. But such a nice cravat.

The Congolese, understandably, didn’t take well to this piecemeal dismemberment of their newly independent state. Likewise, the UN weren’t too keen on this resurgence of colonial interference in Africa, so the Belgians had to make a pretence of non-involvement.

Enter the mercenaries. Funded covertly by Belgian mining companies and spooks from Langley, colourful characters like Major ‘Mad’ Mike Hoare were hired to create an informal private army. Their role was to supplement local Gendarmes in defending Katanga against the rest of Congo, and also from the UN, who had rushed ill-equipped peacekeepers to the region.

So who were these mercs? As usual, it was a fairly motley crew. Some were Brits. Notoriously, a few were Wehrmacht soldiers who were at a loose end after the war. Many were former Belgian troops who had bitter memories of their last experience in Congo and fancied a return match.

Old and worn but still ready for battle. Much like its new owner.

When putting together my mercenary look I’ve decided to impersonate a British ex-squaddie. Think The Wild Geese, but wearing a selection rag-tag kit, not early DPM and ’58 pattern webbing. The most expensive single piece I’ve acquired is an original Denison-style Belgian para smock from the period.

People are asking ludicrous sums of money for these on ebay, but I managed to find a surplus retailer who, for some reason, was letting his stock go ridiculously cheap. Even then, it set me back the thick end of a hundred quid. It’s well-worn, which only adds to the allure. There are rips and holes which were clearly repaired by the former owner over half a century ago.

Perhaps the holes were caused by real bullets. And hell, maybe someone died in it. If so, it doesn’t really bother me that much. As a teenager, my first proper suit came out of the back of the local undertakers, and very handsome it was too, once my mum sponged the stains out.

After studying photos of the period, I’ve paired the Belgian jacket with olive British lightweight trousers, which are a good match for the generic combats that most of Mad Mike’s merry men are pictured wearing. Up top I’ve opted for a Belgian Para beret. Again, there are lots of photos of these being sported by mercs of the period.

I’ve written elsewhere about my reservations about wearing headgear that hasn’t been earned. However, in this case we’re talking about an unofficial force with no formal entry qualifications beyond a general propensity for violence. So I’m prepared to make an exception to my own rule on this occasion.

Before some nice men from Aldershot come round to beat me up, it’s a Belgian para beret, okay?

Again, I’m not going to lose any sleep about wearing this as Katanga actually ceased to exist as a state in 1963. Furthermore, I doubt many Fifth Commando veterans would actually want people to know they served there, so I’m unlikely to offend anyone (though I’m preparing myself for a deluge of angry comments any day now).

As for webbing, I’ve gone for an eclectic mix of kit. The belt is ’37 pattern British. The water bottle is a French item from the period. The ammo pouches are Portuguese. They were involved in their own dirty little colonial war around this time, so I can imagine there were plenty of these pouches floating around Africa at the time.

Just right for FAL mags. Anyone know what service rifle the Portuguese used in the sixties?

Photos of the period show lots of mercs rocking ’37 pattern packs, or the contemporary Belgian equivalent, which is very similar. Just in case there’s ever a Congo-themed milsim event and I need a little extra carriage, I picked one up on ebay.

The pack was heavily stained, and the Portuguese ammo pouches were a lighter colour than the rest of the kit. So I decided to fix both of these issues with a liberal application of Blanco.

Note the ’37 pack on the bloke on the left. Well Blanco’d that man!

Blanco was a clay-like substance beloved of the British Army. For much of the 20th Century, up to the advent of PLCE webbing, squaddies used it to smarten up webbing equipment.

Originally sold in blocks like kitchen soap, it’s now been re-released pre-mixed in bottles, thanks to renewed demand by military re-enactors. You dilute it slightly and daub it on with a sponge or stiff brush. I chose a fetching shade of dark tan called ‘sunburn’, which was first released in 1944, just in time for D-day.

Blanco-ing my kit was a messy and fairly tedious process, but I was delighted with the results. The whole ensemble was now more or less the same colour, but with enough slight variation to maintain the rag-tag mercenary look.

My choice of weapon was easy. This being a Belgian-backed force, it was inevitable that the wonderful FN FAL would be the most-toted mercenary rifle. My King Arms FAL carbine was therefore the natural choice. I’ve written about this lovely weapon elsewhere in my post Two famous Belgians so I won’t go on about it here.

‘That’s it lads. You get stuck in. We’ll stay back here and keep the booze safe.’

So what happened to the mercenaries of Katanga? Suffice to say they are not remembered fondly in Africa or in the halls of the United Nations. Though they did have one last chance to redeem themselves.

During 1964, a communist-backed insurrection by a Congolese faction known as the Simba threatened the Katangese regime. Things got so bad that by October, the Simba had occupied the town of Stanleyville and taken hundreds of Belgian colonists hostage.

Belgium’s response was Operation Dragon Rouge, which saw a force of Belgian paras dropped near Stanleyville from five USAF C-130s, helpfully laid on by those thoughtful people in Langley. 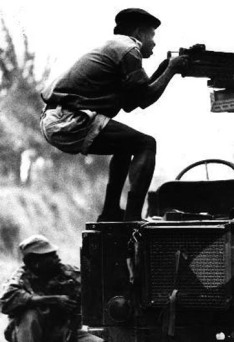 ‘Obtenez un peu!’, or however you say ‘Get some!’ in Belgian.

While celebrated at the time and since as a bold and decisive action, Dragon Rouge was a tactically flawed plan. The force was dropped over Stanleyville Airport, on the outskirts of the town. The Simbas heard the planes, put two and two together and began executing the hostages. At least 20 were killed before the paras reached the town centre. Entebbe this was not.

The slickness of the operation was not helped by the fact that the Belgian commander broke a leg during the jump. This meant he had to direct operations from a wheelbarrow, in which he was pushed around the battlefield by his radio operator.

Luckily, the Belgian paras were joined on the ground by men from Mike Hoare’s Fifth Commando. They proved useful in helping the Belgians liberate Stanleyville from the Simba. As a result, they briefly found themselves lauded in the western press as the good guys.

Major Mike on the blower to his literary agent.

Hoare dined out on this episode for years, writing a number of books about his exploits in Katanga, and at Stanleyville in particular. He later went on to advise the producers of The Wild Geese, which was based very loosely on the myth of his Fifth Commando.

As for Katanga, the state eventually collapsed and was absorbed into Congo, making it one of the shortest-lived countries in world history. The whole episode was a mixture of tragedy and comedy, enlivened by some strong personalities and suffused with healthy doses of venal intrigue and casual violence.

As such, it has all the ingredients to make it the perfect scenario for a milsim game. If it ever happens, sign me up right away.

5 thoughts on “Rumble in the jungle”