I didn’t enjoy being in the school cadet force that much.

In my experience it was largely an excuse for legitimised bullying by the older boys, and for masters to act out their Erwin Rommel fantasies of command.

It’s probably why I’ve never really liked the idea of Milsim. Too many people taking something quite fun far too seriously, while relishing the opportunity to boss others around a little too enthusiastically.

There was one good thing about the cadet force, though. That was the L1A1, better known to us back then as the Self-Loading Rifle, or SLR.

It was basically an extensively anglicised version of the Belgian FN FAL (Fusil Automatique Legere), using parts machined in imperial units rather than metric, and with better gas parts and other detailed improvements.

Between the Malayan Emergency and the Falklands Conflict, it was the standard rifle of the British Army.

We normally only got to use it, closely supervised, on summer camp. The rest of the time, we had to ‘make do’ with the Lee Enfield Mk 4. This was arguably a better rifle and is now regarded as a classic.

But for us back then, the Lee Enfield lacked the raw sex appeal of the SLR, which we saw the ‘real soldiers’ using on telly, everywhere from the Falls Road to Goose Green.

Of course, for a cadet, it was utterly impractical. It was at least as long as some of us were tall. It also had a kick that would reduce the smaller kids to tears. But it was quite something to get to handle one. 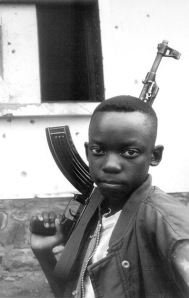 Other countries were wiser in their choice of cadet weaponry.

Imagine my disappointment, then, to miss out on the opportunity to own either of the two airsoft L1A1s which were released around 2008. King Arms came out with the first, using parts from their wider FAL series.

Not to be outdone, Star launched an SLR of its own, with single shot mode only. This replicated the original quite nicely, as unlike its FAL cousin, the L1A1 lacked a full auto function, in keeping with the British Army’s doctrine of Single Aimed Shots rather than spray ’n pray.

2013 brought some welcome news for L1A1 lovers in the shape of the re-release of the King Arms version. The minute I heard about it, I got my pre-order in, and a few weeks later the weapon arrived.

Back in 2008, most reviewers agreed that Star had King Arms beaten for externals, but that the latter company’s internals were superior.

I have no experience of the Star item, so I can’t compare. Suffice to say that the King Arms L1A1 faithfully replicates virtually all the details of the original weapon, as far as I can remember them. It is also pleasantly heavy.

That said, the plastic foregrip is a little less robust than one might hope, and the pot metal fittings seem like they could be on the brittle side. But given the gun’s low production run, one really mustn’t be too picky.

The boss is back.

The gun also boasts a blowback ejection port cover. It’s a novelty I could do without, as anything that adds cosmetic complexity at the potential cost of reliability is a no in my book. But there’s no arguing that it does look cool.

A quick session on the chrono revealed the weapon fires around 400 fps out of the box. This obviously makes it too hot for a full auto skirmish weapon. I had two options. Replace the spring, or perform a vasectomy on the full auto function, locking it into a site-friendly single shot only mode.

In keeping with the real steel’s original design, I decided to go with the latter option. I planned to glue a small nut onto the receiver to prevent the selector switch from reaching ‘full auto’.

But here I faced an immediate problem. Like the AK 47, the FAL family’s fire selector traverses through the ‘full auto’ position until it reaches ‘single shot’ at the end of its arc. My quick fix wasn’t going to work.

The choice of the Professionals.

At this point, I consulted the team at http://www.fire-support.co.uk. Years back, they had gutted two Star L85s for me, replacing many of the early, troublesome internals with more reliable stock items. I was pleased with their workmanship then, so I trusted them to give my L1A1 the snip.

John, one of Firesupport’s founding partners and an accomplished gun tech, advised me that he could re-wire the selector switch, but that there was a risk that every so often, the motor wouldn’t cycle fully. This would result in a stoppage requiring disassembly.

Luckily, he had an elegant fix for the problem: Install a micro-switch inside the stock that would activate full auto briefly, allowing me to clear the stoppage. I left the gun with him, reassured that he had considered the problem so thoroughly.

A few weeks later, Firesupport mailed the gun back to me. As well as removing the full auto function and adding the emergency microswitch, John had noticed that the gun’s grouping was inconsistent. Thus he had upgraded the standard barrel to a Systema 6.04 and replaced the hop rubber with a standard Marui item. He also advised using 0.3g bbs.

The Classic Army M249 microswitch is neatly concealed in the stock, in-line with the battery wiring. The installation makes it a little tight in there, but the L1A1’s stock is a different shape from King Arms’ other FALs, which makes getting a large battery in a bit of squeeze anyway. I’ve now got a 9.6v mini on order.

So how does the L1A1 perform in the field? I’m pleased to say that on its first outing, it more than lived up to expectations. Once I’d got the hop tuned in, it shot straight and reasonably true. There was a slight deviation in fall of shot to the right, but that got better over the course of the day. I suspect a certain amount of bedding-in was needed. It will probably get even more accurate over time.

Range was impressive, too. With 0.3g bbs I was nearly matching sniper rifles. To my surprise, I didn’t miss having full auto once. And the gun drew a lot of admiring attention. One downside: Only a few players had ever heard of the SLR. Which reminded me just how old I am.

The highlight? Taking on three enemy at extreme distance as they moved from one clump of cover to the next. I got two in rapid succession. That was good enough for me, but the third again appeared in the open, my luck held, and I nailed him, too. Three kills in probably just over three seconds. It certainly wasn’t down to any skill on my part, just a good rifle and an enemy who had to learn the ‘no bunching’ rule the hard way.

John at Firesupport deserves unqualified kudos for his excellent work. My L1A1 is perhaps the best set-up gun I’ve owned. And it’s great to be re-united with the Stupidly Long Rifle after all these years.

10 thoughts on “My Stupidly Long Rifle”