Deadlier than the male

Slam the search terms ‘female’ and ‘airsofter’ into Google image search and you’ll get some pretty interesting results.

Do those women really go skirmishing wearing so few clothes? Even in winter? And why do they have such pouty lips? Is it because they’ve caught one too many incoming BBs on the kisser?

There’s a whole industry out there devoted to the artistic genre of ‘girls with guns’. And it seems there’s a thriving sub-culture involving girls with airsoft replicas. 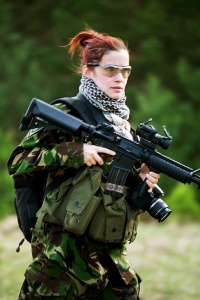 The future of airsoft?

As an airsoft enthusiast, I find this a little annoying. No matter how closely you study the photo to work out exactly which aftermarket rear sling mount she’s attached to her M4, there’s always an annoying piece of the woman’s photoshopped flesh in the way.

You don’t have to be an expert in Freudian symbolism to understand why a significant percentage of men find such imagery alluring. So let’s put the pornographic potential of our hobby to one side and consider a more interesting and encouraging side of airsoft.

Namely, the fact that more and more actual women (not retouched models) seem to be discovering the pastime.

I don’t have any quantitative research on this, but personal observation suggests this is true. And they’re not just long-suffering wives and girlfriends turning up for a day to see what their other half’s strange obsession is all about.

Show up at any site on any given Sunday, and you’ll find a group in the corner with custom rifles, radios, matching uniforms and enough pyros to keep the Syrian uprising going for another three years.

Clearly they’ve been playing for the best part of a decade. Maybe they’re ex-forces. They’ve bonded as a team. On the field, they fight as one, too. And increasingly, there’s a woman in their number. 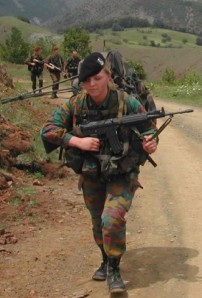 There’s a psychological theory that asserts women have just as much innate propensity for aggression as men. Though upbringing causes women to channel their aggression into subtler, social forms rather than the muscular ones more typically associated with men.

Women’s social aggression is used against other women as a form of sexual competition. The frequent object of this aggression is women who make themselves too easily available to men, thus ruining the chances of their peers.

If this sounds sexist, please don’t blame me. Blame the two (female) researchers at McMaster University in Canada who first developed this hypothesis, and subsequently validated it using controlled psychological experiments.

I have a theory of my own, namely that, as girls and boys are increasingly raised with the same values, female aggression is gradually taking on less of a covert, social form and more of an open, physical one. 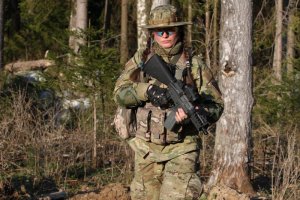 You looking at me?

If we accept (and it’s a big if) that airsoft in some way represents a socially acceptable and well-regulated conduit for aggression, then this theory could help explain why more women are taking up replica arms.

For one, I welcome it. Female players seem to have more patience than men. They know that revenge is a dish best eaten cold. As a result, they will play a more tactical game, waiting to take their shot until they can be sure it will count.

Furthermore, growing numbers of female players can only be good for the reputation of our hobby. Let’s face it, some uninformed observers think we are immature testosterone-driven paramilitary neo-survivalist nutters rather than harmless fantasists. Rightly or wrongly, having our critics know that women enjoy the pastime too will help normalise it in their eyes.

So the next time you’re hit in the gentleman’s area and hear a gleeful feminine giggle coming from the source of the shot, remember it’s for your own good.