Airsoft wouldn’t be half the fun it is without pyros. Let’s face it, our primary weapons sound like souped-up food whisks. Even though the tactical utility of pyros might be limited, the occasional loud bang or cloud of screening smoke help create a decidedly more martial atmosphere on the field.

Besides, who hasn’t harboured fantasies of crawling up to a bunker, posting a grenade and shouting: ‘‘Ave some of that, you [gynecological expletive deleted]’, before hearing a satisfying crump and the loud swearing of your shrapnel-blasted enemy? Just like this video, in fact:

This post is all about things that go bang. I may cover smoke on a later occasion, but I have a limited interest in it. I’m a simple man, and in common with many of the male persuasion, I like stuff that explodes.

Let’s qualify that for a second. I like the idea of stuff that explodes. Truth be told, I have a love/hate relationship with grenades and thunderflashes. When I was growing up, the countdown to 5th November (our British festival of religious intolerance) would be marked by a deluge of public information commercials about the dangers of throwing fireworks. 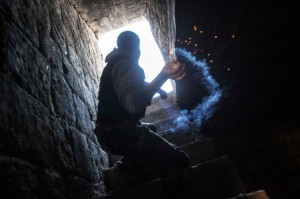 A Syrian player blatantly ignoring the ‘No homemades’ rule.

And here I am, 40 years later, standing in a field with a load of other people, throwing what amount to fireworks. I feel conflicted, to say the very least. So much so that I often fluff the act of deploying the things. Many is the time I have panicked and dropped one at my feet, only to be hoist by my own petard, quite literally. Of course, the fact that I throw like a girl doesn’t help.

This mixture of enthusiasm and mild fear means that I am pretty diligent in following the grenadier’s code. I encourage you to do the same. Here are what I consider the basic rules:

Right, now on to the fun stuff. I get my pyros from www.tlsfx.co.uk. They are one of a handful of highly professional gaming pyro manufacturers. TLSFX follow environmental and health and safety regulations to the letter. I know this for a fact, as my last delivery from them came emblazoned with warning stickers and dire warnings about explosive contents. Not the kind of thing you want the neighbours to see you signing for.

One of the joys of grenades is that there are now so many varieties to choose from. I’ll describe a few that I use.

But first, I’ll briefly mention one that I don’t. The Mk 9 thunderflash. It’s banned at most sites, for good reason. The military use it as an artillery simulator. It’s that loud. You wouldn’t want one going off next to you. Marshals and game organisers will occasional use one to add a little spice to milsim games, and your ears will be ringing for a bit if they do.

A fine pair of balls.

My favourite banger is the new generation TLSFX ball grenade, which comes with a pull-and-throw safety pin igniter for extra realism. It’s good to chuck and delivers a satisfying bang with a rather disappointing shower of bb shrapnel. I achieved my one and only grenade kill with one of these, taking out two opponents in open woodland. Very satisfying.

By far the most common thing that goes bang is the Mk 5 thunderflash. You can carry a lot of these, and they’re inexpensive. They make a bang of about the same amplitude as a ball grenade. Though watch it: TLSFX make them extra thick. This extra stuffing makes them quite a bit louder than the equivalents from other manufacturers.

This is all well and good. However, I’ve got into a spot of bother using them at a site in the past. While the site in question permits Mk 5s, a local chicken farmer complained that my TLSFX Mk 5s were putting his birds off the lay. I was politely asked to desist.

Perhaps this is why TLSFX also now make a Mk 4. This is much the same size as their Mk 5, but slightly quieter. Good for sites next to chicken farms.

Excitingly, TLSFX now make a range of ‘speciality’ grenades which use the same safety pin ignition mechanism as their ball grenades, and look a little like real-life distraction grenades.

Your lungs will be safe with this. Promise.

Their M13 ‘thermobaric’ grenade thankfully isn’t really thermobaric. In real life, thermobaric devices are fuel-air explosives that use atmospheric oxygen rather than carrying their own oxidiser. This creates an underpressure wave which can turn your lungs inside out. Sorry for that rather graphic image, but war isn’t nice. That’s why I stick to airsoft.

The M13 is really just a frag grenade without the bb shrapnel, but with the same bang and a bigger flash. It’s good for woodland.

TLSFX’s M12 grenade, on the other hand, is a flashbang which is more flash than bang. It’s the considerate way to dispatch opponents in enclosed spaces, where a loud bang verges on the impolite. The flash is very impressive. This thing would be great fun to use at night.

It flashes. It bangs.

No piece on grenades would be complete without reference to the re-usable BFG, or Blank Firing Grenade. This is a neat device which uses .22 blanks and a neat spring mechanism to create a Mk 5 style bang. You can also use 12 bore saluting rounds, but these create a noise equivalent to a Mk 9, and are therefore of no real use at most sites.

The benefit of the BFG is that the running costs are very low. .22 blanks are cheaper than pyros, so you literally get more bangs for your buck. Convinced by this argument, I bought two. But the downside, and the reason I rarely use them, is that they can be hard to find again once you’ve chucked them. And nearly impossible to locate in woodland. I suppose they’re great if you only do CQB, but otherwise they’re a little problematic.

So there you go. A quick run-down on some things that go bang. Have fun, and above all, be safe.