Old weapons never die. They just get reincarnated as airsoft classics for sad players in their forties who remember them from books, movies or real life. One such weapon is the glorious Browning Hi-Power 9mm automatic pistol. 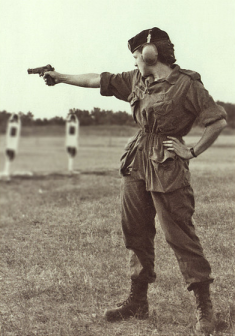 Over the last few years, the British Army has been phasing out this venerable handgun for the trendy new Glock 17. Its reasoning is that the Glock is quicker on the draw. This attribute was apparently vital in the latter days of our misguided Afghan adventure, when the turncoat Afghan soldier or copper next to you was more likely to pose a threat to your life and limb than Johnny Taliban.

Former squaddies will tell you that the real reason for the switch is that most of the Hi-Powers in service were, to use a technical gun-smithing term ‘knackered’, many having been brought into service just after WWII.

Whatever the reason, the passing of Mr Browning has been lamented by few serving soldiers. Though there has been wailing and gnashing of teeth amongst armchair firearms enthusiasts, for whom the weapon is something of a religious icon. 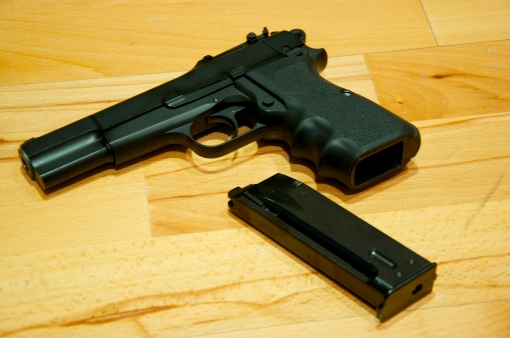 My WE Hi-Power. No hop-up, loads of presence.

The Hi-Power’s holiness is largely due to its direct descent from St John of Springfield, otherwise known as John Browning, the designer of the almighty 1911. In 1923, the French Government released an RFP for a new service pistol. Fabrique Nationale was anxious to join the contest, so they approached John Browning to design one for them. 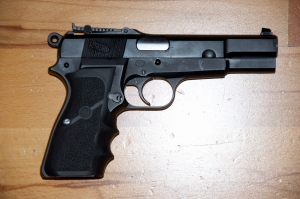 Now with Hogue grip for when the going gets slippy.

Browning had sold his patent for the 1911 to Colt, so he faced the task of incorporating some of the best bits of his masterwork into his new design without infringing patent law.

Somehow, he succeeded. FN took up the design after his death some years later, won the French contract and gave birth to one of the most successful handguns in history. The Hi-Power has been in production since 1932, with the latest versions barely altered from the original. The design was even ripped-off by the Germans during the 1939-45 unpleasantness. It is still the standard carry of many armed services worldwide.

My Hi-Power is by WE. It’s a gas blowback version with no hop-up, a failing which definitely makes it a short-range last-ditch weapon. In its defence, the magazine holds 20 rounds, so you’ll have taken a few of the buggers with you by the time you go down.

The gun comes as standard with fake-wood grips, which I have removed in favour of a beautiful Hogue wrap-around rubber grip from those good people at midwayuk.com.

The irony is I don’t carry a pistol as a rule, only as a back up when I’m in a sniper role. However, I like my Browning so much I might just slip it into the inside pocket of my combat jacket for my first milsim game in September. If I’m captured and disarmed, Mr Browning may come in handy for giving my captors a surprise gift.